Skip to content
Home/Accounting/Future Readiness for Accountants: Blockchain
Previous Next

According to an International Data Corporation (IDC) report, global spending on blockchain solutions will reach $2.1 billion in 2018, over twice the amount spent in 2017. Big Four firms are already embracing and experimenting with blockchain, exploring how it can be applied to accounting. Blockchain technology is on the rise, and it will have major implications for the future of accounting.

Thousands of years ago, when humans lived in small communities, it was easy for trade to happen on a peer-to-peer basis. You simply approached your neighbor and made a deal. But as societies and economies grew larger and more complex, we needed a way to verify transactions and make trade secure. We created trusted institutions like banks and lawyers to help us move money, value, and goods. In effect, these trusted institutions became necessary middlemen in every transaction. 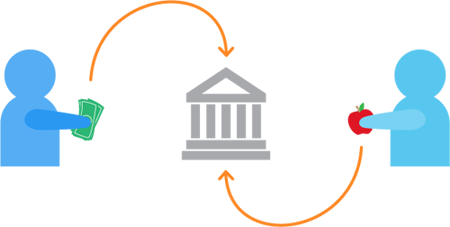 Blockchain technology cuts out the middlemen and takes us all the way back to peer-to-peer trade. Instead of using a bank or other trusted institution to verify the transaction, blockchain uses software code and a vast, decentralized network of computers. Essentially, blockchain has made peer-to-peer trade viable on a global scale.

A blockchain is a decentralized, chronological ledger of transactions (or other information) protected by cryptography. The ledger is made up of a chain of blocks, which each contain information about transactions. Many blockchains are public, meaning anyone can access them using their personal computers.

How does blockchain work?

Blockchain is most famous for its association with Bitcoin, but blockchain isn’t limited to just cryptocurrency. You can record and track almost anything using blockchain, including deeds, documents, medical records, and financial transactions.

Every block in a blockchain contains detailed data. For example, if you wanted to use a blockchain to track the ownership of a house, each block would contain vital information such as the buyer, the seller, the transaction amount, and when it occurred.

Blockchain is based on the familiar concept of the general ledger and is designed to be non-destructive. That is, when an entry needs to be altered, the original is left intact, and a new entry is made at the bottom of the ledger. That way, everyone can see when and why the change was made.

Blockchains are peer-to-peer, meaning there’s no centralized bank or other trusted institution controlling transactions; instead, every personal computer is a single node in a vast, interconnected network. Every node has its own copy of the blockchain ledger that automatically updates when a new block is added.

This decentralization means that blockchain is very secure. In a centralized system (such as a bank), hackers only have to attack one institution to gain access to the data they want. To attack a blockchain, hackers would have to attack every single node in the network—a virtually impossible feat. 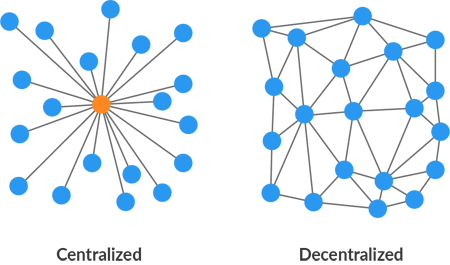 Every block that’s added to the blockchain requires the consensus and verification of the majority of the network. This verification process is what replaces trusted institutions like banks and allows people to trade on a peer-to-peer basis.

To create a block and add it to the chain, the entire network of nodes (personal computers) is involved:

The node creating the block solves a cryptographic puzzle, which results in a hash, a string of letters and numbers that’s like a unique fingerprint.

The original node shares the hash with all other nodes. The other nodes check the work and make sure the puzzle was solved correctly. This is called proof-of-work. 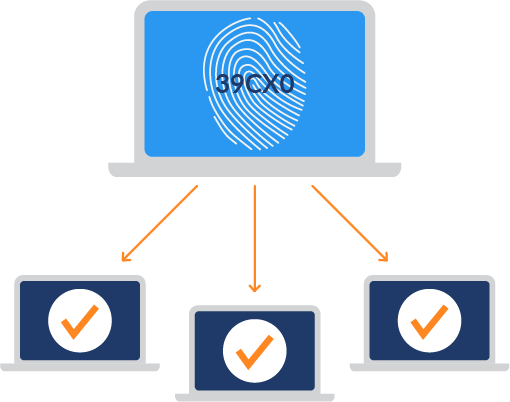 The other nodes accept the proof-of-work and add the block to the chain.

Every block contains its own unique hash and the hash of the block that came before it. These hashes are what connect—or chain—each block together, and they help make blockchain more secure. In order for a blockchain to function, all of the hashes between blocks must match up.

If you alter a block in any way, then its hash changes—which invalidates every subsequent block. So if someone attempted to tamper with a block, they’d change its hash and the hash of every block after it—an attempt that would require a massive amount of computer processing power and be very obvious to any outside observers.

What does blockchain mean for accountants?

The security of blockchains makes them an ideal tool to use in accounting. Because they’re so secure and resistant to modification, blockchains can be used to securely process payments, record transactions, and execute documents. As a result, blockchain technology may replace certain aspects of an accountant’s job, such as bookkeeping, verifying transactions, maintaining and reconciling ledgers, and auditing.

Out of these, blockchain will probably have the greatest impact on auditing. Blockchains are real-time, update faster than any human, and do it all with fewer errors. Once transactions are recorded and authenticated, they’re unalterable, so the integrity of the ledger can’t be compromised. In some cases, auditors may not be needed to verify ledgers. With the power of blockchain, the day-to-day tasks of an auditor must be completely reimagined.

However, this automation of routine tasks will not render accountants obsolete, but give them more time and resources for higher-level thinking, research, and strategy. Instead of recordkeeping or verifying ledgers, auditors will dive deep into data and provide valuable takeaways to their clients. Instead of working on more mundane tasks, accountants will develop key strategies, uncover significant findings, and create new and exciting ways to serve their clients.

Accountants will also need to act as interpreters between complex blockchain processes and clients. While every accountant won’t need to know the nitty-gritty of how blockchain technology works, they’ll need to be able to draw meaningful conclusions and give sound advice. By positioning themselves as mediators, accountants will be crucial assets in helping their clients understand the implications of blockchain technology.

Change is ahead, bringing fear and uncertainty for many. But blockchain technology isn’t a death knell for the accounting industry—rather, it’s an opportunity for accountants to reshape their roles, evolve their skills, and embrace a new technology that will help them supercharge their results.