Skip to content
Home/Business Tips, Small Business/7 Workplace Conflicts Every Small Business Owner Will Face (And How to Deal with Them)
Previous Next

Running a small business definitely has its perks. From being your own boss to making decisions and creating your own schedule, the life of an entrepreneur signifies freedom and independence for many.

In fact, according to a survey from the Global Entrepreneurship Monitor, there are currently more than 582 million people worldwide in the process of starting or running their own business.

Yet maintaining a successful business over time seems to be a struggle.

The entrepreneurs that make it past the ten-year mark have seen their share of difficulties. They’ve dealt with conflicts, struggles, and disagreements in the workplace, and have come out with greater strength and knowledge to power their business.

Workplace conflicts are inevitable, but they don’t have to be destructive. All entrepreneurs make mistakes—successful ones learn from them.

Here are seven workplace conflicts that every small business owner will face—and how to deal with them.

Strong leadership promotes healthy structure and organization within a team. Weak leadership breeds chaos, confusion, and unhappy employees. Conflict can occur when there is no clear definition of responsibilities. For example, when it is unclear who is responsible for a certain project, employees may cross boundaries they didn’t know existed. To prevent this from happening, it takes an assertive leader to delegate responsibilities and make sure the team is on the same page.

Conflict can also arise from different leadership styles. Sometimes, an individual’s natural leadership style is incompatible with the employees they manage. Certain leadership techniques that work well for some employees can be problematic for others. In fact, a study by Gallup found that poorly managed work groups are about 50% less productive and 44% less profitable than well-managed groups.

Workers also respond poorly to leaders who micromanage. Employees should never feel micromanaged or controlled. Give them the freedom to make choices while keeping leadership roles well-defined. For a positive work environment, it’s important to maintain structure while also encouraging independence.

Employees often rely on someone else to get a job done. For example, if a member of your sales team regularly sends late monthly reports, this can delay your accountant from getting their job done on time. If departments become segmented, this type of conflict can slow down the overall workflow of the company. To curb these behaviors, make sure employees’ roles and responsibilities are clearly defined. Verify that employees are held responsible for the tasks they’re supposed to complete. Give them enough space to get their work done, but firmly implement consequences if tasks are routinely unmet.

Everyone has a different work style. For example, certain employees may prefer to work independently, while others prefer a team-oriented approach. Some would rather complete work quickly on their own, while others would rather take time brainstorming in a group.

Here are four common work styles—as described by Javis Brunson Consulting—and how to manage each one.

Interpersonal conflicts are natural and happen between people every day. These types of conflicts can be especially common in the workplace when different personalities interact in a confined space. They can be about almost anything, from workplace romances to an unsanitary coworker to someone stealing a soda from the break room.

This is one of the more difficult workplace conflicts to deal with. As a small business owner, you can’t let this type of conflict spread to the rest of the workplace. It’s your job to keep the peace. Typically, this type of conflict would be handled by the HR department. For many small businesses, however, the responsibility may fall on the owner.

Some interpersonal conflicts are best approached by taking the employees aside and speaking to them individually. Let them communicate their point of view, but make them aware of how their behavior is affecting the office. Show empathy and look for a solution, suggesting positive ways to best resolve the conflict.

Communication is key in relationships, and the business world is no exception. To run a successful team, business owners, managers, and employees need to establish clear and efficient communication. But sometimes communication gets muddled and expectations become unclear. Poor communication can cause friction in the workplace—including anger, confusion, and unhappiness—and eventually lead to poor workflow and lost profits.

In fact, 96% of executives blame lack of collaboration and poor communication for workplace failures, according to a study by Salesforce. 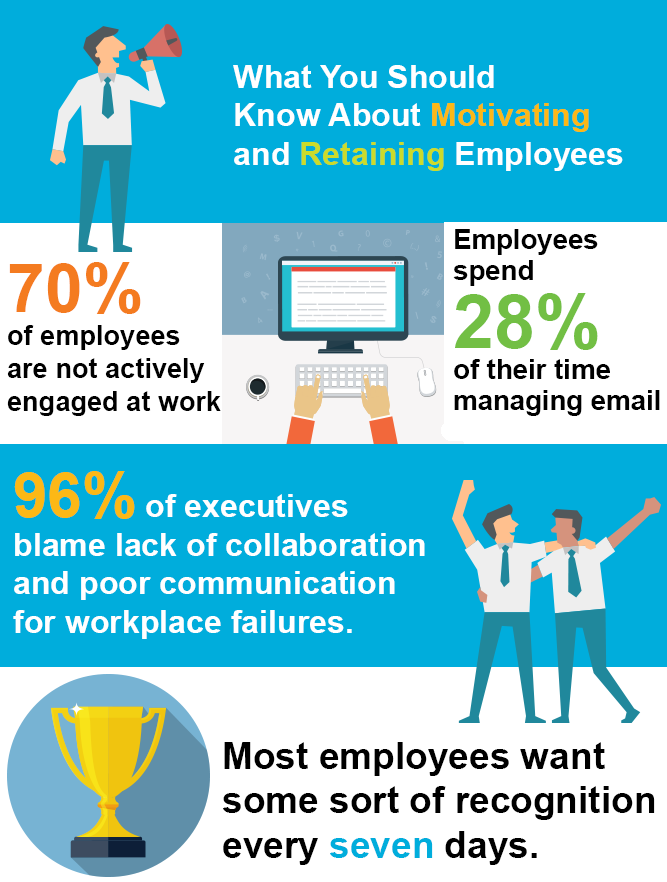 To advocate open communication within the team, start by keeping everyone informed. Don’t expect someone in sales to know about all the latest IT developments. Simple email updates between departments can help keep everyone in the loop.

You can also schedule trainings for employees in one department to educate those in another. Your customer support team doesn’t need to know the ins and outs of sales, but having a general knowledge of the sales process can help them better communicate with customers and other employees.

Successful businesses have a well-defined personality. They make it clear to their employees exactly what they stand for. Some companies have a team-based culture that encourages active employee participation, while others choose a more formal managerial approach.

Google is widely known as having one of the best workplace cultures in the world, and is a regular on Glassdoor’s “Best Places to Work” list. They treat their employees to free meals, free haircuts, and even on-site health care.

As a small business, you may not have the budget for more extreme benefits, but brainstorm ideas you think would motivate your employees. A simple coffee and snack bar could help boost morale and curb appetites. Company culture is important because employees are more likely to enjoy their job when they feel appreciated. They tend to develop better relationships with coworkers and even become more productive.

Sometimes an employee’s personal goals clash with the goals of the organization. This could mean choosing a course of action that benefits them but is harmful to the company, such as secretly working for two competing companies at the same time or hiring an applicant because of personal interests. In the workplace, personal relationships and professional responsibilities should not intersect. Conflicts of interest can ruin the reputation of employees and businesses.

Set your business up for success

The road to entrepreneurial freedom is cluttered with stumbling blocks. You’ll make mistakes as you build your business, but you’ll only succeed if you learn from them. Sometimes experience is the best teacher.

Learning how to handle workplace conflicts calmly and effectively is an important trait for any successful small business owner. Most of the time, a solution can be found when you take the time to listen. Remember, running a business is a team effort. If you set your team up for success, your entire organization will reap the benefits.