You know you live in the future when you’re at a convenience store and someone’s using their watch to pay for something.  Truly, it’s never been easier to pay for something since the advent of the credit card, but in the past decade or so, the idea of paying for things on the go – doing anything on the go, really – has exploded into our little world and taken us by storm.  But, this is something completely unprecedented, previously only accessible in sci-fi novels.  Absent are the whirrs, literal bells, and whistles we’d expect to see from the latest fly-by-night (though well-intentioned) inventor of the last century – I’m thinking of anyone who invented one of those failed early flying contraptions, particularly – replaced by tiny, silent, and really quite innocuous-looking innovations.  But, all the same, completely incredible.

Based on current mobile trends, this wearable technology we would have called completely outlandish thirty years ago is probably here to stay and will likely become the norm along with mobile payments in general.  So, yes, it’s undoubtedly the future now.  No jetpacks yet, but at least Geordi LaForge will be impressed that we finally caught up to him. 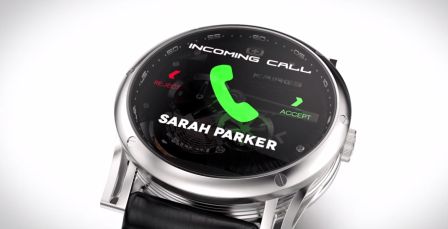 This is one of the devices I made an example of in the first paragraph.  (Still in its nascence, obviously, or they would have combined the two words – à la smartphone – already)  And, like the double-goliath fight we have in the smartphone software realm, we’ll have the same couple of giants (Android and Apple) duking it out over smart watch market share.   However, that doesn’t mean there isn’t room for some more competition.  Pebble Technology was one of the first to release a smart watch, in 2014 – and, it was dubbed the best of the year by smartwatchnews.org.  Other brands boasting a smart watch include Sony, Cookoo, and Martian, all with slightly different looks and feels to their software.  Aside from letting consumers pay for things with a flick of the wrist, smart watches have other capabilities like SMS, phone calls (when tethered to a smartphone), and even fitness apps that can monitor one’s heart rate.  The only drawback to owning a smart watch seems to be that, since the market is so new, the watches haven’t been developed to their fullest potential yet.  In a couple of years, though, these trendy watches should be better – and more popular – than ever. 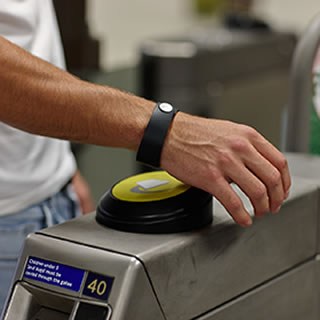 These don’t have the bells or whistles of smart watches, but they do the one thing they’re designed to do well – link to a specific credit or debit card and pay for purchases using NFC card readers.  Barclaycard’s wristband seems to be the most popular, but, like with smart watches, other brands are quickly pushing their own products into this new marketplace.  The band caters to a very specific group of buyers – those who want the convenience of mobile payment capability at their wrist but not all the features of a smart watch – and that could be both a blessing and a curse.  As the markets for these wearable mobile payments evolve, we’ll see how the wristband falls into the mix.  One advantage the payment wristband has is evident, though: it’s its price.  Ranging from about $100 (so far) on the high end to $0 (for Barclay card’s band, as they undoubtedly collect a fee from banks each time the bands are loaded with cash or used for payment), consumers will certainly save money on a simple wristband if they don’t desire all the features of a a full watch. 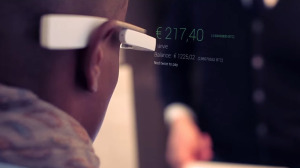 Wristbands and watches are cool and all, but… what about a machine doing your bidding with just a nod?  That sort of act won’t be reserved for royals anymore as Eaze has unveiled a new feature for Google Glass called Nod to Pay, which allows the Glass wearer to pay with bitcoin by scanning a QR code, then nodding in order to approve the transaction.  So far, the app is only compatible with QR codes and bitcoin, but looks to build compatibility with other currencies and digital wallets soon enough.  QR codes have been around a relatively long time (in the terms we’re talking about – I mean more than a few years) and may gain more traction than they had as more people start using mobile payment methods like these, but, as in the case of bitcoin, that ultimate success remains to be seen.  Like the two other innovations mentioned, the market for this sort of thing is simply so new, it’s hard to see where the product will go yet .  In a few years, however, it should be much more clear.

How do these mobile payment solutions pertain to you as a merchant?

That’s easy.  As consumers rely more and more on mobile payment solutions, it’s incumbent upon you as a merchant to equip yourself to handle those payments.  Whether that means setting up an eCommerce store and a mobile-optimized website for web payments via smartphone or investing in NFC credit card readers – and other kinds of safe, modern credit card processing solutions – for your in-person transactions (Aside: people are already using regular old NFC credit cards to pay for things) it’s very important to prepare yourself for the impending mobile wave.  It isn’t quite here yet in force, but it’s certainly breached and it’s on its way to shore.  If you’re smart about it all, you can use the wave as an advantage and cater to a new kind of customer, the tech-savvy, totally mobile kind.  As mobile technology becomes more prevalent, these types of consumers will be the norm, so it’s probably best to prepare while the wave is still just a crest.